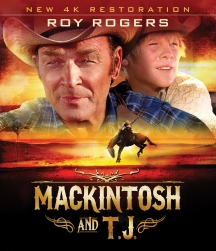 In his triumphant final film role, Roy Rogers (Lights of Old Santa Fe) stars as Mackintosh, a migrant cowboy traveling across the West Texas plains in his rundown pickup truck. While looking for work breaking horses, Mackintosh befriends T.J. (future ProRodeo Hall of Famer Clay O'Brien), a runaway teen. The two form an unlikely bond and find jobs together at a cattle ranch where Mackintosh impresses the owner with his bronco-taming skills. Trouble, however, is on the horizon, but Mackintosh proves himself as a man who is not afraid to take a stand.

The best film the King of the Cowboys ever stared in!

At the other end of his long and notable career, Rogers really does fantastic work in this "small" film. The care afforded this transfer is evident, and this overall one of the nicest looking releases I've personally reviewed that has come from MVD Visual... On the whole this is a really organic and pleasing looking transfer. Recommended.

The heartwarming Mackintosh and TJ provided one final role for Roy Rogers, a nice way for the Singing Cowboy to go out in style. It's a sweet, good-natured tale of modern ranching, grounded with credible characters.

The movie looks excellent on Blu-ray. Detail and clarity are pleasingly revealing. Technical parameters provided by MVD for the BD are superb. Unfiltered without a hint of video processing, this is a film-like presentation of solid filmmaking from the 1970s. The 1.78:1 presentation is a faithful effort with crisp imagery.

Better than a mere curiosity, Mackintosh and TJ is a most welcome release and for Western genre fans Highly Recommended.