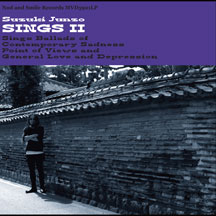 ... Junzo not only follows the set traditions of folk, roots and blues but also engages in energized rule breaking of the conventions... a real classic.

... finds all of Suzuki Juno's fine muse gelling into a melancholy chant backed with (his own) splendid electric guitar work. I like this a lot.

He makes black metal growls over acoustic guitar, sings wrecked ballads over distorted electric leads. Guy is a darn good rock songwriter & easily builds tension until it boils over in a powerful cathartic release. Fans ... of that Japanese underground thing where things are either fragile or superheavy will be extremely pleased.

...Sings II emitted a beautiful, poignant and multifaceted vibe. It infused my room with an intriguing amalgamation of folk, blues, drone, american primitivism, and some fuzzed out shredding.