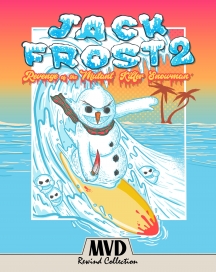 Jack Frost (Scott MacDonald), the chiller killer is back and he's mad as hell. An accidental lab experiment resurrected the evil snowman, but this time, the crystal killer can't be stopped by fire, bullets or even his worst enemy, chemical anti-freeze. With revenge on his mind, Jack sets out to finish off his nemesis, Sheriff Sam (Christopher Allport), who is vacationing on a Caribbean island. Sam's balmy paradise turns into a Winter Terrorland when Jack freezes the island and quickly ices everyone around him. No one can stop the chilling killing spree when Jack can travel as lethal liquid or fatal, frosty flakes. Just when you thawed it was safe to go back in the fridge!

When it comes to a film where the snowman is the killer, you can't take it seriously whatsoever. This sequel is just as satisfying as the original with even more tongue in cheek moments to be had.

On the plus side, the palette is very nicely suffused, and despite the anomalies detail levels can actually be quite good.

The MVD Rewind Collection gives Jack Frost 2: Revenge of the Mutant Killer Snowman a good audio/video presentation and an assortment of insightful extras.

They’re witty and have plenty to say. And anyone that does dig this sequel should have a good time with their fan commentary.

New stuff begins  with an Audio Commentary with Tony Piluso, Newt Wallen and Crystal Quin of ‘Hack the Movies’, which is a fun and lively listen, not super informative, but more jokey.

Jack Frost 2 is a feature that takes the campy original film and dials it up to eleven for the sequel.