THEIR THIRST IS THE CURSE! 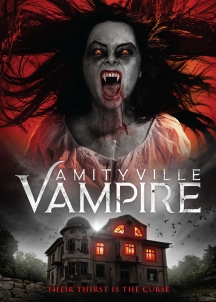 Utterly unaware that the eerily vacant house is imbued with the demonic force behind the brutal DeFeo Murders on 112 Ocean Avenue, an unsuspecting cleaning crew gets to work. However, before long, a long-dormant curse spreads death in the room, and an ancient evil escapes in the thick woods. Now, those unfortunate souls who wander in the forest fall prey to something wicked, thirsty for human blood. Who can escape from the fangs of the abominable Amityville vampire?

'Amityville Vampire' actually wins a star simply because it opens on a shot of the infamous Ocean Avenue home.