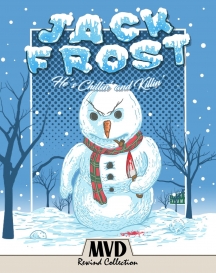 He's got ice in his veins and he's giving cold-blooded a whole new meaning... his name is JACK FROST. After five years of terror and 38 bodies in five states, serial killer Jack is on his way to execution. But a freak accident with a truckload of genetic material in the middle of a snowstorm mutates Jack into a killer snowman. Now only an army can stop the slayride of terror from this frosty monster with icicle fangs. Hell has just frozen over... he's the abominable Jack Frost.

In making it horribly bad, Jack Frost is at the very least entertaining. And is there anything else you could ask for from a B-movie about a serial-killing snowman?

'Jack Frost' is Troma-esque, but it's a stronger effort with decidedly greater imagination... gleefully messing with the purity of holiday sentiment by having a snowman pile up the dead bodies.

The picture quality is quite strong in a restored 2K transfer, and the bonus features are aplenty.

Detail levels are generally quite good throughout this presentation, and there's no real age related wear and tear to report, nor any obvious aggressive digital tweaking of the im

Jack Frost returns to Blu-ray via a solid release from MVD Rewind Collection that comes with a strong audio/video presentation and a wealth of extra content, recommended.

Tony Piluso and company lovingly lampoon the flick from start to finish and it makes for a great listen.

So, if you're in the mood for a festive horror film, that’s both playful and brutal, Jack Frost is certainly one of the better examples of this blend.

It feels like everyone involved knew the sort of film they were making it and delivered the appropriate amount of weirdness it needed to make it work.

I was surprised at how fun this movie was in spite of the content involved, a serial killer in the form of a snowman.

I was surprised at how fun this movie was in spite of the content involved, a serial killer in the form of a snowman.

If you know what you are getting into with this film, you can have a raucous time with it. Recommended

You need to add this to your slasher and horror collection ASAP.