Double album reissue of this classic from 1995! First time on vinyl! Remastered with bonus tracks! 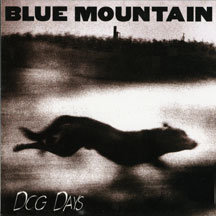 Blue Mountain was an American alt-country/roots rock band formed in 1991 in Oxford, Mississippi, by Cary Hudson (guitar and vocals) and Laurie Stirratt (bass and harmony vocals), who is the twin sister of John Stirratt, the bass player for the like-minded Americana band Wilco. Dog Days is the 1995 release from Blue Mountain and is highly regarded as a classic in the alt-country/roots rock scene. Remastered and re-issued (first time on vinyl) on double LP with bonus tracks

'While Blue Mountain never gained the same degree of semi-fame as their alt-country contemporaries like the Jayhawks, Uncle Tupelo, and Whiskeytown, they were regarded by many educated observers as one of the best acts on the scene, and Dog Days shows why -- they could write, sing, and play with passion and street smarts, and every song on this album hits its target dead on. It's a minor masterpiece of the genre.'

Sleek black vinyl, a two record set, with liner notes big enough for you to read without a magnifying glass. It sounds great, the music locked in the grooves jumping out and grabbing you by the ears, pulling you along for a nostalgic ride in the (alt) country.