THE HILARIOUS COMEDY FROM THE ACADEMY AWARD® WINNING DIRECTOR OF BOWLING FOR COLUMBINE AND FAHRENHEIT 9/11! 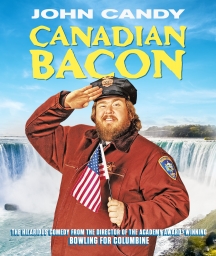 Faced with sagging approval ratings and disgruntled arms manufacturers, the U.S. President (Alda) decides to cook up a new Cold War with Canada! And after a flood of media propaganda, Americans waste no time in "patriotically" burning their ice skates and swearing off maple syrup. But when bumbling U.S. sheriff Boomer (Candy) and his hair-trigger deputy Honey (Perlman) decide to take matters into their own hands and lead a preemptive strike, they soon find themselves embroiled in a hilarious international incident that's too close for comfort, eh!

A determinedly wacky comedy. Candy is, as usual, loveable.