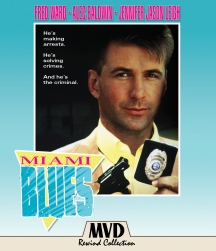 Junior Frenger (Alec Baldwin, The Departed, "30 Rock") is trouble and Sgt. Hoke Moseley (Fred Ward, Tremors, Short Cuts) knows it. Junior, smooth-talking, good-looking ex-con tiptoes on the borderline of psychotic behavior in this thriller-with-a-comic-edge. Moseley is the detective hot on his trail after Junior kills a Hare Krishna, robs a pickpocket, then steals Moseley's badge, his gun... and even his false teeth. Junior's running around the streets of Miami posing as a cop, assaulting people and making arrests. And even though he promises his live-in lover (an ex-prostitute played by Jennifer Jason Leigh, The Hateful Eight) that he'll stay out of crime, he continues playing cops and robbers on both sides of the law. Quirky and unpredictable, Miami Blues has been hailed by critics and the public alike as a dark, comic cops-and-robbers thriller unlike any other.

One of Baldwin's best performances in a solid black comedy

Baldwin, Ward and Leigh are all perfect in this violent and funny and underseen gem.