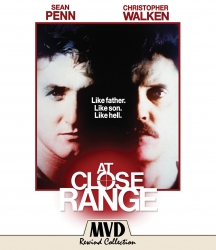 Juvenile delinquent Brad Whitewood, Jr. (Penn) knows about petty theft, but he wants big money - enough to blow the lid off his boring life, enough to get out of town and to find his ol' man (Walken). He wants to be like his dad, a big-time thief, who knows "the business." Seductive and sinister, Brad's father is full of toxic wisdom that makes his illicit life appear eerily sexy. But when Brad witnesses his father deliberately killing someone, he realizes he may not only be in over his head... he may also lose it for good.

A very tough picture... audiences will respond to the very strong performances of the two leads, especially Walken in one of his best roles.

Mr. Kazan's screenplay is lean and to the point...There's something bold about the film's wealth of imagery.

A spare, violent unforgiving story... is also a story with passages of love and adventure and cheerfulness... two great actors, Penn and Walken, at the top of their forms in roles that give them a lot to work with.

Walken and Penn are both terrific

At Close Range is a truly great crime thriller from the ‘80s.