SOMETIMES REVENGE IS BITTER, NOT SWEET. 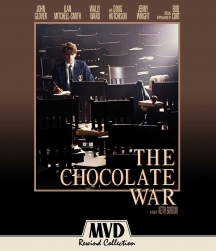 Based on Robert Cormier's controversial novel - once the most widely banned book in America -this "starkly beautiful" (San Francisco Chronicle) allegory of abusive power is set in a Catholic boy's school where a chocolate sale becomes a war over conformity. Jerry (Ilan Mitchell-Smith, Weird Science) is a student who refuses to take part, undercutting ambitious school administrator Brother Leon (John Glover, Scrooged). Leon secretly enlists Archie (Wallace Langham credited as Wally Ward, Ford v. Ferrari) - the sadistic mastermind of the school's resident gang - to force Jerry into line. But motives and results are far more complex than they first seem in this 'fascinating film done with style, with care and with excellence" (Los Angeles Times)

Powerful, eerily somber and possessed with just the right amount of black humor.

A first-rate adaptation of Robert Cormier's dark, cautionary tale about personal freedom... a haunting allegory... may be best remembered as the directing debut of Keith Gordon.

A fascinating film done with style, with care and with excellence in every department.

The soundtrack here is a definite asset

The drama is real and the performances are all terrific