The battle between Cats and Dogs goes Galactic! 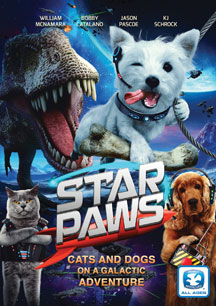 The battle between Cats and Dogs goes Galactic! An evil kitten known as Adventure Cat, and his army of cloned kitties, seeks to find an ancient bone with magical powers to take over the galaxy. It's up to an elite group of space dogs, headed by the intrepid General Ruff (William McNamara), to beat the kittens to the bone. As the race to find the mythical bone heats up, the space dogs build a time machine in order to travel back to the time of the dinosaurs in hopes of beating Adventure Cat to the bone and saving the Universe from total destruction.