Mack Stevens & His In The Groove Boys - Ain't That Right: An Unconventional Tribute To Sun Records 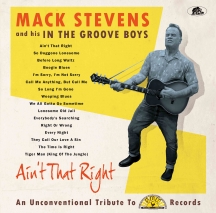 -Bear Family Records® is pleased to welcome Texas rockabilly ace and 'Wildman' Mack Stevens to our label! -Mack Stevens has released more than 50 records in all formats on various labels in many countries during his long career. -His wild stage show is legendary; he has played his heart out on the stages of nearly every major rockabilly festival in the world. -Born in 1955, Mack grew up listening to the music of Carl Perkins, Elvis and Johnny Cash. -Almost logically, now comes a vinyl album dedicated to the Sun label - highly individual, gritty, loud and wild, obscure stuff, no replicated hits! -Accompanied by his exquisite band from Mack's second home Argentina, he has put his own pure, hard and distinctive stamp on every song. -Oldie fans - hands off, this is not for you! This material is for those who want to experience power, pain and passion in every note: Rockabilly in its purest form! -Original LP pressed on black 140-gram vinyl! If you trust the rare published resumes, Mack Stevens was born in the mid-fifties in Corsicana, southeast of Dallas, Texas. His musical love is for original rockabilly, as it was produced at that time when he came into the world, especially in Memphis by Sam Phillips for his Sun Records label in his Sun studio. It took a while to Mack Steven's first own release. In 1993, his debut album came out on Germany's Eagle Records. Singles, LPs, CDs and even 78s followed for labels in France, Japan and, among others, the USA, where he was able to impress legendary rockabilly producer Ronny Weiser. Ronny released four CDs in the following three years on his Rollin' Rock label. Mack went on to record for Scana, Part, On The Hill, Hog Maw and his own Freedonia label. Mack Stevens has now recorded more than 500 songs, either rockabilly, hillbilly country or trashy blues. He enthusiastically collects original rockabilly records and had his own radio show, 'In The Groove'. Mack is and remains a purist.