Mader - In The Soup: A Film By Alexandre Rockwell (Original Motion Picture Soundtrack) 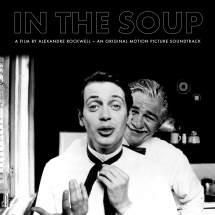 As part of the 25th anniversary release of the 1992 Sundance Jury Prize winning, In the Soup, Factory 25 created a ltd. edition vinyl LP. This will be the first time the stand-alone soundtrack has been available in any form, anywhere. The original music was composed by Mader, a seasoned French composer who has scored many films including Ang Lee's The Wedding Banquet and Eat Drink, Man Woman.