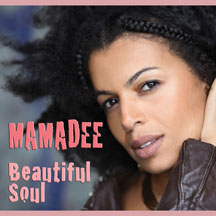 Beautiful Soul is the long-awaited debut album by Mamadee. Born in the far east of Germany of African and German parents, Mamadee moved to Cologne at the age of 19 to pursue her artistic career. Producer Born Free saw her performance there and was blown away by her voice and songs. They began working together and Born Free introduced her to European audiences in his video "Good Time Fool". One year later and her debut album is almost ready. In the meantime, she has been touring with top-selling Universal Music reggae artist Gentleman. The video of her first single "Who I Am" has been featured on YouTube, and her second single "Africa Is Calling", features a duet with Ky-Mani Marley, the great legend Bob Marley's son. The legendary Lee "Scratch" Perry also joins Mamadee in "Forgiveness (Road of Life Riddim)" on her debut.