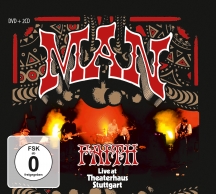 "Faith" was recorded at the Theaterhaus Stuttgart, Germany on 10 March 2016 and is released as a 2-CD and 1-DVD set by MiG-music.