You Have The Right To Remain Silent... FOREVER! 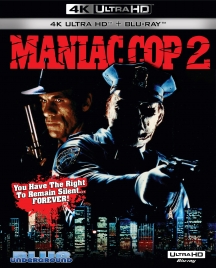 The "Maniac Cop" is back from the dead and stalking the streets of New York once more. Officer Matt Cordell was once a hero, but after being framed by corrupt superiors and brutally assaulted in prison, he sets out on a macabre mission of vengeance, teaming up with a vicious serial killer to track down those that wronged him and make them pay... with their lives!

MANIAC COP 2 Is Quite Truly The Greatest '80s Horror-Action Movie Ever Made!

MANIAC COP 2 Is A Thinking Man's Exploitation Film, Improving On The 1988 Original!

The Best Of The Series... An Amazing Film!

An Ultra-Violent, Yet Equally Creative, Journey Into Hell!

It is pretty obvious at this point that the titles the folks at Blue Underground are releasing on 4K Blu-ray will never ever have to be upgraded again because they feature astonishing technical presentations of impeccable restorations. This upcoming 4K Blu-ray release of MANIAC COP 2 is another stunner, so if you like the film give yourself an early holiday present. HIGHLY RECOMMENDED!

Blue Underground has really been doing an excellent job with their HD and UHD titles and MANIAC COP 2 & 3 may well have raised the bar. Blue Underground never ceases to impress me with how nicely they handle their UHD films!

In the middle of the gore effects and the explosions, we also have a grand transfer that will please everyone who might be interested in upgrading to 4K, as this thing looks AMAZING.

The stunt work here, especially in MC2, outpaces what you'll find in movies that cost five times as much.

Maniac Cop 2 does everything that the first does but does it a little bit crazier and bigger than the first. The results are probably the best film in the series.

As storytelling, it’s deranged, but the craft is first-rate, and the energy is relentless.

It’s also amazing to see the likes of Michael Lerner (Barton Fink) and Charles Napier (The Silence of the Lambs) adding dramatic heft to such a gloriously bad movie.

Maniac Cop 2 (1990) is a fun, violent and kick-ass revenger with some fantastic action, brutal deaths and a finale that's engulfed in flames. This sucker is action-packed from start to finish and a shit-ton of fun, this is definitely a 90's horror entry that doesn't gets it's proper due!

Maniac Cop 2 is one of the few horror sequels that is superior in almost every way to the original and it is an absolute blast to watch.

The car-taxi chase, the handcuff outside of a car sequence and the impressively prolonged fire stunt work in the climax are nothing short of thrilling.

MANIAC COP 2 & 3 have both been upgraded to 4K and for all intents and purposes look amazing.

As a whole, the Maniac Cop series wrestles with questions of policing within a hybrid of slasher and noir.

Another great release from Blue Underground, the 4K Ultra HD presentation of Maniac Cop 2 is excellent, as is the extras package.

The video and audio is great and the supplemental material is a great addition to this release. I highly recommend snagging this one especially if you have never seen this follow up to William Lustig’s cult classic.

Back on the Beat: The Making of Maniac Cop 2 (46:52) is an extensive behind-the-scenes retrospective, produced by Blue Underground, including new interviews with the people involved (director William Lustig, writer Larry Cohen, actors Robert Davi and Claudia Christian, et al) in the project. There aren’t many new movies which get this kind of treatment…

If you enjoy the work of William Lustig, Maniac Cop 2 is likely one of your favorite titles from the filmmaker. This release from Blue Underground looks phenomenal, will entertain genre fans and provide plenty of background details about the movie that even enthusiasts may not have known about. This release is highly recommended to any genre fan!

This is a movie I love enough to recommend no matter how the rest of the package had turned out, but a breathtaking presentation and a strong slate of extras ensure that Maniac Cop 2is that much more of an essential purchase for anyone with a taste for unhinged action.

Maniac Cop 2 gets a spectacular 4K UHD upgrade from Blue Underground, who continue to raise the bar when it comes to cult and foreign cinema on 4K UHD, highly recommended.

here’s a lot to like about this sequel with most of what worked plus an added body count.

In fact, the movie has several outstanding stunts, including perhaps the longest, albeit filmed in small bits, man-on-fire occurrence on film.

The 4K’s HDR added range and impact to the tones.

The 4K transfer looks great and better than I remember watching them on VHS.

You cannot do better than this film.

Maniac Cop 2 is that rare sequel that actually tops it’s predecessor; the body count is higher, there’s way more blood n’ action, and it’s hard to resist that “Universal Monster movie by way of 42nd Street with a dash of gritty police procedural tossed in for grins” combo… this is the ghoulish good shit cats n’ creeps!

These releases are well balanced in audio and visual with audio being the major standout here.

These releases are well balanced in audio and visual with audio being the major standout here.

Still, this is a horror sequel that does just about everything right by introducing interesting new characters alongside the few who return, significantly amping up the action, providing the Maniac Cop with a new look more in line with his iconic slasher contemporaries, and best of all: giving the titular antagonist his own rap theme song.