Marc Amacher is back with a new album and ready to conquer the international scene and pushes the blues envelope on "Grandhotel". 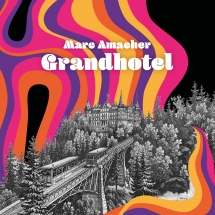 If you like your blues loud, raw and unconventional, then Marc Amacher is the just the thing for you. Those traits go a long way in defining this exceptional Swiss musician and were more apparent than ever on "Roadhouse" - the 2019 release with which he toured successfully in several European countries. Now, two years later, he's back with a new album and ready to conquer the international scene.

The title of the new album is symbolic. Two years ago, the singer, guitarist and songwriter was hanging out at the Roadhouse - that infamous, open-all-night joint at the end of the road where nobody asks any questions. Germany's premiere classic rock magazine ROCKS saw the album's "extremely intense" 13 tracks as an expression of Amacher's "undying love of the blues." A review on the website Dark-stars.de praised Amacher's "raw, deep voice," the "cool guitars" and the excellent musicianship of the whole band. But more than anything, the straightforward, unfiltered live takes on Roadhouse were a surprise to anyone familiar with Amacher only through his earlier studio albums, where the production was much slicker, or through his appearances on the popular TV show The Voice Of Germany in 2016. (Contrary to his own expectations, Amacher reached the series finale.)

Now, Amacher's musical travels take him a bit further on up the road to the "Grandhotel". The name suggests luxury and perhaps a return to his former "dignified" ways. But make no mistake: The broad range of styles on "Grandhotel" sounds nothing like a fancy dress evening in the ballroom of a five-star accommodation, but more like a free-and-easy rock'n'roll party in one of the back rooms.