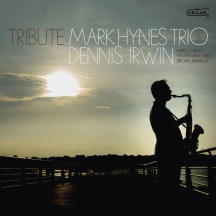 The new record from saxophonist Mark Hynes, features the late bassist Dennis Irwin in a rare unreleased recording. With the dynamic drummer Darrell Green, the trio swings joyously with a modern panache. A veteran sideman, Irwin was diagnosed with terminal cancer before the album could be completed. A bonus track is dedicated to him, with Yasushi Nakamura on bass and Jerome Jennings on drums.

''The sax man realized his dream of playing with one of the bass greats that had a 360 degree affection for all music in 2007. Before he could book the follow up, Dennis Irwin died of cancer. This live in the studio set captures the spontaneity a real pro would want to have delivered on one of his last dates. A straight up jazzbo groover, the tunes are classics done right throughout.''
Chris Spector - Midwest Record September 4, 2020

'Tribute' The Mark Hynes Trio featuring Dennis Irwin on Bass is full of some beautiful Sounds and Feelings . The power of this timeless Music rings Strong and Clear !!!