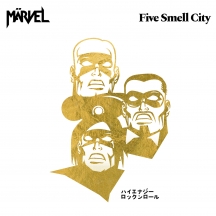 Marvel debut album Five Smell City gets the release it deserved. This time remastered and released on vinyl for the first time ever. A deluxe version of Five Smell City with covers with hot foil, printed inner sleeve and insert. Limited to 500 copies on splatter vinyl. Märvel is one of the longest going Scandinavian Rocks act that is loved all around the world. Marvel is celebrating 20 year as a band in 2022. Until now, the band has released plenty of singles and eight albums; Five Smell City, Thunderblood Heart, Unleashed, Warhawks of War (featuring Dregen/ Backyard Babies and Robert Dahlqvist/ The Hellacopters), Hadal Zone Express, The Hills Have Eyes (produced by Fred Estby), At the Sunshine Factory (recorded in Märvels home/ custom built studio Solskensfabriken) and the latest release Guilty Pleasures. Marvel ́s explosive live performances have earned the band a loyal Army of fans with official fan clubs all over the world.