When new student David (Derrel Maury) arrives at Central High, he discovers bullies who rule the school with intimidation and violence. 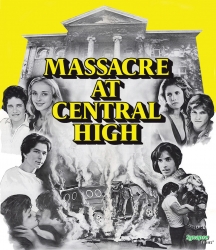 "A considerable filmmaking achievement... Intelligent and uncompromising." -- Roger Ebert, Sneak Previews When new student David (Derrel Maury) arrives at Central High, he discovers that it is lorded over by a gang of bullies who rule the school through intimidation and violence. David's friend Mark (Andrew Stevens, THE FURY) encourages him to join this dominant clique, but instead David stands up for their victims, and the gang cripples him in retaliation. Soon David begins taking steps to end their reign of terror permanently, setting in motion an explosive cycle of killing that may not end until no one is left to graduate! Co-starring Robert Carradine (REVENGE OF THE NERDS), Kimberly Beck (FRIDAY THE 13TH: THE FINAL CHAPTER), and Rainbeaux Smith (LEMORA: A CHILD'S TALE OF THE SUPERNATURAL), MASSACRE AT CENTRAL HIGH is the startling American debut of Dutch writer/director Renee Daalder. While packing in all the sex and violence that drive-in audiences demanded, Daalder also delivers a potent allegory about fascism and power structures in a high-school world where adults are absent. A cult and critical favorite since its 1976 release (and an evident influence on the classic HEATHERS), MASSACRE AT CENTRAL HIGH now available in this director approved restoration from Synapse Films.

This new edition looks fabulous. It’s a great example of seventies exploitation and then some.

Massacre at Central High has a power all of its own that will never be duplicated.

This is definitely a film worth a good look

Given Daalder was tasked with writing and directing nothing more than a low budget exploitation picture with a sordid title and specific body count, it’s remarkable that he created such a substantial film.

the film boasts a compelling setup bolstered by good performances

As a dark study of the American teenager and societal norms, there is a lot to recommend in this unsettling feature with its clever script and strong performances.

If you appreciate an offbeat dark comedy, give this one a spin. Recommended

Massacre at Central High had a difficult restoration process, but the final results are a very nice looking

Massacre At Central High will be of interest to those who enjoy high school dramas, though you’ve also got to be prepared for brutal bullying and violence.