Mawkin - Down Among The Dead Men

Down Among The Dead Men is the new album from Mawkin 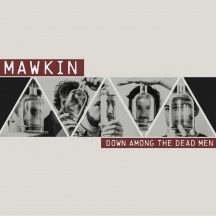 Built on a solid traditional foundation and influenced by the swagger of 90s indie rock and Bellowhead-style brouhaha, Mawkin's sound comes alive with a large dose of Essex-boy energy on stage.It boasts a more visceral, amplified sound that's grounded not just in confidence but also in exquisite musicality. No surprise then that MOJO regards them as 'unconditionally mighty', and Q Magazine declares them 'invigorating and highly inventive'. Since they released their acclaimed 2015 album 'The Ties That Bind', Mawkin have been lauded as a 'modern-day Fairport' by fans and have won the affections of the harshest of critics. They have graced the main stages of Cambridge Folk Festival and Towersey Folk Festival and had the privilege of supporting Bellowhead on their farewell tour of 2016.