Singer, musician, composer and actor Mel Tormé was one of the influential hit-making vocalists who emerged in the post-war years 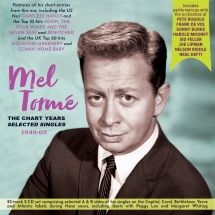 Singer, musician, composer and actor Mel Tormé was one of the influential hit-making vocalists who emerged in the post-war years, although Tormé, as a fine jazz performer and successful songwriter, transcended the description of "crooner" often applied to his contemporaries. Making his debut when still in his teens, he had been recording since the latter years of WWII (see "Mel Tormé - The Early Years 1944-47" Acrobat ACTRCD9086), and had written the classic hit "The Christmas Song", before signing to Capitol in 1949. This great-value 52-track 2-CD collection comprises selected A & B sides of his releases on the Capitol, Coral, Bethlehem, Verve and Atlantic labels during these years, including duets with Peggy Lee and Margaret Whiting - the creative orientation of some of those labels underlines the jazz dimension of his output. It features all his chart entries from this era, including the US No.1 "Careless Hands" and the Top 10 hits "Again", "The Four Winds And The Seven Seas" and "Bewitched" and the UK Top 20 hits "Mountain Greenery" and "Comin' Home Baby". It includes recordings with some of the most noted arranger/conductors of the day, including Nelson Riddle, Billy May, Neal Hefti, Frank De Vol, Pete Rugolo, Marty Paich, Sonny Burke and others. It's a fine showcase for one of the era's classiest and most versatile performers.

Torme gives definitive takes of “Skylark”, “Bewitched” and “Lullabye of the Leaves” with a mix of streetwise and innocent wanderlust.