Melanie - For One Night Only

The first ever release of a Melanie concert on DVD. 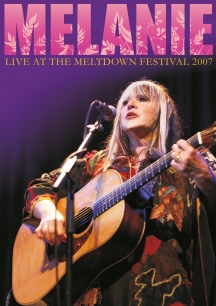 With guitar in hand, Melanie conquered Woodstock and the original Glastonbury with her songwriting, powerful voice and even more powerful message. She was once hailed by The New York Times as the female Bob DyIan and was the first solo pop/rock artist ever to appear at Carnegie Hall, the Metropolitan Opera House, the Sydney Opera House. Her record sales are more than eighty million to date and her songs have been covered by singers as diverse as Cher, Dolly Parton, and Macy Gray. Although UNICEF made her its spokesperson, she has continued to tour world-wide, but not in Britian. She played her last sell out British gig nearly 20 years ago before Jarvis Cocker sent her a special invitation to open the Meltdown Festival at the Queen Elizabeth Hall, London in June 2007. This DVD showcases that intimate evening's performance from a unique songstress who sings all of her hits including Brand New Key, Beautiful People, Peace Will Come, Hush A Bye, Ruby Tuesday, Alexander Beetle and many more.