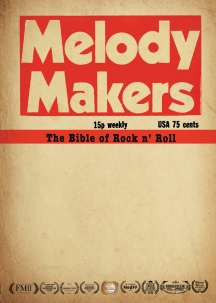 This stunning, award winning film takes you behind the scenes to explode the myths, honor the legends, and reveal the incredible stories and never-before-seen photographs of rock giants like Mick Jagger, David Bowie, Elton John, Bob Dylan, Jimmy Page, Jimi Hendrix, Ray Davies, Frank Zappa, Patti Smith and many, many others. This tell-all reveals anecdotes and unpublished photos from the world's most influential music publication, Melody Maker magazine with its intimate access to legendary rock bands including The Rolling Stones and the Beatles, Pink Floyd, Queen, The Who, Led Zeppelin, The Animals and on and on. At the heart of this film is Melody Maker's head photographer, Barrie Wentzell who takes us along on an intimate journey with his colleagues into the world of rock icons. These journalists, with cameras in hand, had free rein and were creatively involved with the artists, something unheard of today. The film captures this unique period telling the story behind the magazine's rise and fall, showing first hand how the artists, the record companies and journalists came to move a generation. The magazine was a "must read" during its time, now the movie is a "must see" for musicians, music fans and photo buffs alike!

Chronicles the heyday years of the hugely influential British music magazine... Capturing the biggest stars of the era in dramatic and often unguarded poses.

A must-see for any fan of rock 'n' roll.

The stories are fun, and the photos are great - Wentzell really does have an incredible eye