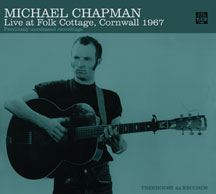 The first known recordings by British folk guitar hero Michael Chapman. Previously unreleased, these are the earliest known recordings of this great British guitar hero, or as Michael Chapman calls it "The album I had no idea I had made!" This follows on the heels of Light in The Attic'c catalog re-issues. The story of how Michael Chapman turned pro as a musician, walking into a Cornish pub and offering to play a gig in return for shelter from the rain outside is both well known and well told. These "lost" recordings catch up with our hero of the piece some eight months later as he played a show at Folk Cottage, Mitchell near Newquay in Cornwall on Good Friday, 24th March 1967. The Folk Cottage was established in 1963 and the former granite built farm workers building had secured it's reputation as a seminal venue on the circuit, with a host of talented local folk artists such as John The Fish and Brenda Wotton performing there as well as it proving to be a haven for the likes of Wizz Jones and Ralph McTell. At the time Chapman was being billed as "exciting new blues artist" and that is reflected in some of the material captured in these recordings ("Baby Please Don't Go", "Parchman Farm" and "Kansas City") but there is also the odd surprise in store for Chapman fans, including a cover of Buddy Holly's "That'll Be The Day" as well as three original instrumentals that highlight the emergence of Chapman's innovative and instantly recognisable guitar style that we know today. The original recordings are quite remarkable given the equipment and set up at their disposal. With the exception of editing out some re-tuning of guitars (sorry Michael!) we have preserved the performance in its entirety, providing a unique insight into the emergence of Michael as the artist we know today as well as a vivid soundtrack of a venue pivotal to the British folk and roots scene.