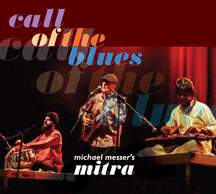 The debut album by Michael Messer's Mitra finds the masterful guitarist and band blending a unique fusion of blues slide guitar, Hindustani classical slide guitar and tabla rhythms into something really special. Michael Messer's Mitra is a trio comprising British blues innovator and slide guitarist, Michael Messer, Hindustani slide guitar maestro from Mumbai India, Manish Pingle , and London-based tabla player, Gurdain Singh Rayatt. This is more than another meeting of musicians from different cultures, this is a band with its own unique sound, an exhilarating and highly accessible fusion of blues and Hindustani classical music. With vocals, slide guitars and tabla, these three musicians from opposite sides of the globe create a fascinating musical journey, running from the banks of the Mississippi, via London, to Mumbai and the Ganges Delta.

Not since the Beatles teamed up with Ravi Shankar back in the day has there been such an experimental and inspired meeting of musical cultures. I've no doubt this album is going to be internationally lauded for both its musicianship and Messer's stunning vision

MAGNIFICENT INDIAN BLUES ....Call Of The Blues is a remarkable fusion of country blues with Hindustani music, showcasing the splendour of the slide guitar and the talent of three extraordinary musicians

Filled With Eastern Spice and Magic. Every note is blues that shimmer like sari silk. 10/10