This album chooses 20th century American music to send its message for a reason and does so at a critical moment. 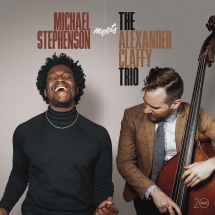 This album chooses 20th century American music to send its message for a reason.

Twentieth century American popular music is one of the greatest artistic gifts ever given to the world -- and barely anyone talks about it when discussing America. In contrast, Michael Stephenson and Alexander Claffy have made an album that leads with that message. It revels in it -- and it does so at a critical moment. Right now, when we're asking ourselves quite painfully, who are we, and who do we want to be as Americans, the music on this album matters because it reminds us of who we are. It helps answer: what do we have to give? And it dares us: can we give the best of ourselves -- our hearts, our joy, our genius -- to the world? Can we even recognize that part of ourselves?

From Nat King Cole to Ray Charles to Marvin Gaye: this album takes that journey. In pointing us to our own past, this album makes a very modern statement here and now. In the face of injustice, inequality and racism, this music reminds us of our capacity to love, to hold each other and dance, and to agitate for a better future. You ask us what it means to be a Black American musician, or a white American musician? In response we play a slice of our inheritance -- some of the most beautiful songs we know!