In celebration of Ralph Vaughan Williams's 150th Anniversary celebrations in 2022. 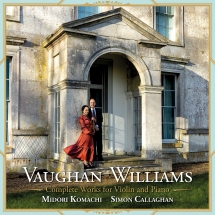 In celebration of Ralph Vaughan Williams's 150th Anniversary celebrations in 2022.

Starting from Vaughan William's' early pieces 'Romance and Pastorale', the album takes us through the composer's complete musical development: from the '6 Studies in English Folk Song', to the 'The Lark Ascending' in its original version for violin and piano. The original and lesser known version (compared to the orchestral version) gives an even more intimate account of the ethereal world against the backdrop of the First World War, and deeply resonates the composer's hope for the preservation of peace in nature. In contrast, the rarely performed Sonata, written towards the end of his life, depicts emotional turmoil that cuts deep into the composer's thoughts. The turbulence that prevails throughout the work is finally brought to a sense of healing, with a recollection of 'The Lark Ascending' in the end. Along with these intricate connections between each piece, this album takes us on an all-embracing journey through the composer's stylistic development.

Accompanying their performance is a CD booklet including photos specially taken with the artists for this album at Leith Hill Place, Vaughan Williams's childhood home (National Trust). Additionally, based on extensive research in the manuscript archives, Midori Komachi's liner notes in this booklet offer a unique perspective and a deeper understanding of these works.