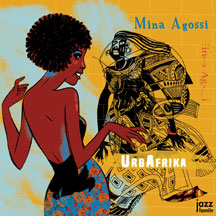 The dazzling French-Beninese singer, Mina Agossi, celebrates her Beninese heritage across eleven original songs, two co-written - one by Eric Jacot, and the other with Jean AdagbÃ©non. It symbolises the fusion between two continents and the desire to play traditional rhythms in different ways. After singing the blues, both retro and off-beat on 'Fresh', her next-to-last album, Mina Agossi, has been honoured by legendary Ahmad Jamal inviting her to perform on his new album 'Marseille', and now continues to push the limits of creativity with 'UrbAfrika'. The album marks a return to the organic energy sources of Benin, with the musicians including Jean Adagbenon, that land's leading drummer/singer revisiting a multitude of traditional rhythms and the whole joining up with the Guadeloupian tones of Laurent Succab on vocals and percussion. The group also includes Eric Jacot on the upright bass, Thibaut Lemoing on keyboards and the illustrious Philippe Combelle on percussion. Another highlight is the playing of the incomparable Paco SÃ©ry, a special guest on the recording, who enchants us with his mbira playing and vocal contributions.