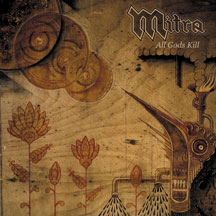 Mitra rises from the ashes of Speedealer (aka REO Speedealer) and features former Billyclub frontman Kurt Grayson. 'All Gods Kill' revels in Southern swagger and whiskey-soaked sting. As feverish as a long summer night in the Lone Star State, the 13-song debut seethes with a greasy, gritty menace. Face it, rock 'n roll was never supposed to be polite, and Mitra delivers with a destructive primal urge.