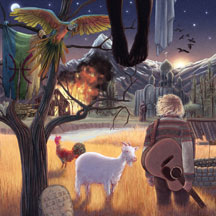 Pal Moddi Knutsen, a 29-year-old from northern Norway, has released a remarkable collection of songs that have, at one stage, been banned, censored or silenced. The attempts to suppress them were as mild as an airplay ban and as brutal as murder. With great sensitivity and imagination, Norwegian singer-songwriter Moddi has given them new life and created a moving and eye-opening album.