When a new vampire (Gregson Wagner) shows up in LA, the Count wants her gone. Her only chance at immortality lies in the fangs of Dallas (Van Dien). 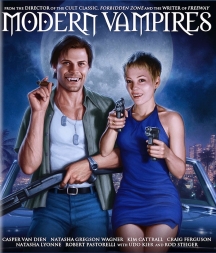 Los Angeles has a discreet community of tortured, bloodthirsty creatures of the night. But when a mysterious vampire (Natasha Gregson Wagner - Lost Highway) enters the scene, The Count wants this blood-sucking seductress eliminated before her rampage of death exposes the cult. Her only chance at immortality lies in the fangs of Dallas (Casper Van Dien - Starship Troopers). But when a distraught mortal, Dr. Frederick van Helsing (Rod Steiger - The Amityville Horror), seeks revenge on the vampires that damned his son, he vows to kill them all, slowly. Together with a band of vampire hunters, Dr. Van Helsing declared war on the underground church of damnation. Welcome to Transylvania in the Hollywood Hills.

'No one combines dirty violence, seedy sex and malicious wit with quite the panache of their writer/director Matthew Bright.'

Bonus goodies for this little horror gem from filmmaker Richard Elfman (Forbidden Zone) include commentary, where he is joined by Casper Van Dien, a newly-prepared video session with Elfman and a behind-the-scenes featurette.