When prisoner Chung is given half a wooden keepsake by a one-eyed master he breaks out of prison to search for the other half to discover its purpose. 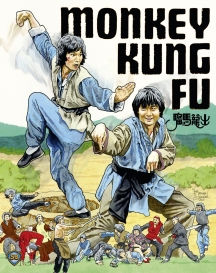 From director Mar Lo (Shaolin Thief), and starring Siu-Tung Ching (The Shaolin Boxer) comes this fast-moving Wuxia classic from the legendary Shaw Brothers studio. When prisoner Ching is given half of a wooden keepsake by a one eyed-master about to be executed, he breaks out of prison to go in search of the other half to discover its purpose. However, on his quest he is pursued by a gang leader who will also stop at nothing find out its secrets. Embroiling mystical promise, an adventurous journey and a search for the truth into its winding storyline, Money Kung Fu AKA Stroke of Death is a uniquely satisfying late seventies delve into the magical world of martial arts Hong Kong cinema.

if you want to see some awesome action scenes including one of the best final fights in kung fu history, then look no further than MONKEY KUNG FU