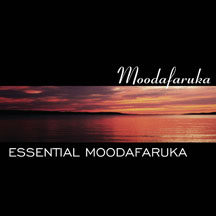 Mixing Flamenco, Middle Eastern, Spanish and Western motifs, Moodafaruka creates a tapestry of sound that is both familiar and new. In 1999, guitarist Rom Ryan, already with two successful solo releases, began collaborating with different artists. They combined "mood" with "faruka" (farruca), a flamenco style of dance, to create Moodafaruka - Mood of the Dance, and released three CDs to rave reviews, radio play around the globe, and thousands in sales: La Luna Lounge in 1999, Zazu in 2001, and Blame It On The Moon in 2004. Essential Moodafaruka is a collection of favorites drawn from Moodafaruka's first three CDs, presented mostly in the order in which they were originally recorded, with two new songs recorded especially for this collection.