Moodafaruka & Friends - The One World Festival 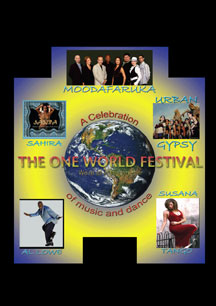 Mixing Flamenco, Middle Eastern, Spanish and Western motifs, Moodafaruka creates a tapestry of sound that is both familiar and new. This 90-minute DVD captures some of the performances of the 2008 One World Festival in Houston, Texas. In 1999, guitarist Rom Ryan began the World Fusion group Moodafaruka. Along the way, Rom expanded his music with dance and founded the One World Festival.