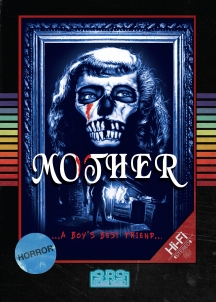 A boy's best friend is his Mother... two Sacred Monsters...one desolate farmhouse... Lost in Eisenhower's America... a compassionate tale of unreasoning rage... a Surrealist Docudrama...in grainy Black & White...No dialogue... only dissonant strings & Russian voices... cries lost in the heavens... a descent into madness... Lucifer's lonely man... adrift amidst the century's underside... an Oedipal/Transvestite/Nazi/Cannibal... a White Trash Tragedy...a DiPaolo Moving Picture... ~MOTHER~ Includes the bonus short, "Brutal Ardor" - A young wife vainly seeks comfort from the source of her pain in this deep dive into the self-destructive bonds of an abusive relationship. Trapped in a tiny apartment while fighting against her sexual and monetary dependence on her brutal husband, this desperate young woman is overcome by horrible visions she is unable to control, leading her into the depths of despair and a future that races away, far beyond her control.

A stark, unsettling, altogether unpleasant glimpse into murderous dementia and one seriously fucked up family.

raw, experimental, and steeped in family fueled sickness, DiPaolo gets points for maintaining such an unwavering sour vision. The lack of dialogue and jarring sound design gives this tale an effectively eerie edge