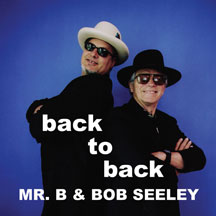 When Mr. B was playing in front of his first large audience and met Bob Seeley for the first time many years ago, little did he know that the two would become close friends and two of the better known international purveyors of boogie-woogie piano alive today. Mr. B, influenced by a number boogie-woogie piano greats including Little Brother Montgomery, and Bob Seeley, a classical pianist by training and protÃ©gÃ© of the late great Meade Lux Lewis, deliver grace, style, lightning, and thunder. Here the two play blues and jazz standards back-to-back, in two different styles. This audio CD is the original studio recording, which first captured this concept and motivated them to commit to a DVD of their live show to be released later this year. The disc also contains two bonus tracks, where each contributes an additional favorite, not to be missed.