Mr. B Trio - My Sunday Best 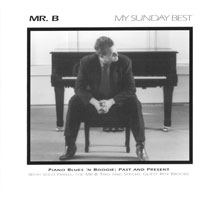 Blues and boogie-woogie pianist Mark Lincoln Braun (a.k.a. Mr. B) has become one of the premiere purveyors of a vanishing art. Having learned his craft first-hand from the early masters, he is a rare living link to the first generation of blues and boogie pianists. Steeped in the rich legacy of this tremendously exciting music, Mr. B learned directly from blues and boogie legends like Little Brother Montgomery, Boogie Woogie Red, and Blind John Davis. In demand for both educational programs and concert performances, he has performed coast to coast and throughout Europe, Canada, Mexico, and South America. He has also appeared on numerous National Public Radio broadcasts.