A DISABLED MAN IN A WORLD OF LUST 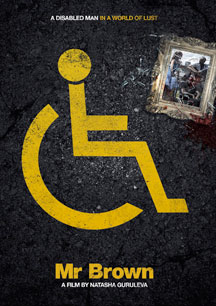 "Mr. Brown" is a middle-aged handicapped black man, former athlet, in a wheel chair. He endlessly listens to music, reads books and looks out the window to oversee the roofs of neighboring houses in Harlem. Nothing breaks his monotonous loneliness except for the visits of two helpers - a young Russian woman-social worker and a young black man-home attendant - who merely do their duties. But in Mr. Brown's imagination they all have a passionate affair. He feels that the home attendant loves the social worker but is very jealous of her because she is madly in love with her subject - Mr. Brown, and Mr. Brown himself is in love with the home attendant-boy. These "relationships" develop gradually over continuous visits of two helpers. And in Mr. Brown's world their passion is expressed through the dance. Unable to withstand the energy of love and possession Mr. Brown "kills" the home attendant and sinks into a prison of his loneliness and wheel chair