Dinner Will Be Killer 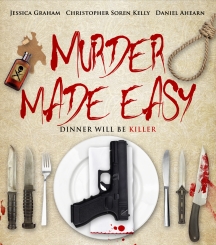 Best pals Joan and Michael invite their dearest friends over for a cordial dinner to discuss the passing of Joan's husband Neil. But as each guest arrives, dark secrets are revealed and murder is definitely on the menu.

Genre masters like Alfred Hitchcock, Brian De Palma, David Fincher, and Karyn Kusama all know how to build tension in a single location through dialogue, space, and action. Building a murder mystery thriller in the modern landscape of cinema where short impulse and visual overstimulation is a true challenge for the most talented writers and filmmakers. Coming off a very successful film festival run, Murder Made Easy is a throwback to the classic murder mysteries that follow in the footsteps of the masters.