Maria and TS-347 are being pursued by a military cell responsible for scientific experiments that have resulted in a zombie apocalypse. 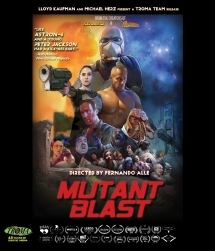 Maria, a fearless soldier, and TS-347, a man with superhuman strength, are being pursued by a military cell responsible for scientific experiments that have resulted in a zombie apocalypse. On the way, they will meet Pedro, a man with few ambitions and a great hangover. Together, they will try to escape to a safe place, but complications will cross their paths in the form of a nuclear bomb.

Up there with The Toxic Avenger, Cannibal the Musical, andPoultrygeist: Night of the Chicken Dead, Mutant Blast may very well become one of Troma's cult classics.

Mutant Blast is the most sheer FUN I've had with a genre movie in what feels like an age. It's gory, irreverent, and just on the right side of bonkers tobe one hell of a crazy ride and one hell of a recommendation.

Chock full with plenty of action, Mutant Blast, simply put is a simple, yet thoroughly enjoyable ride from start to finish.

You’re guaranteed to have a killer time...definitely a standout.

In the gloriously objectionable essence of all that makes Troma Troma, Mutant Blast is textbook Troma, a modern new face for the company, and is radiantly glowing from the same toxic waste that gave birth to the beloved Toxie.