Half man, half beast... all terror! 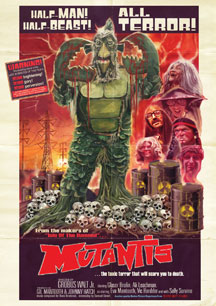 This homage/parody of 1970's monster movies features buckets of gore, cheese and sleaze, not to mention all the bad wigs and dubbing you've come to expect from the makers of "Isle of the Damned!" When an unscrupulous scientist drags his stepchildren out into the forest to use them as bait in the hopes of luring out a big foot, not even the team of hillbillies he hired can contain the horror they find: the horror of Mutantis! Only the adventurer Dr. William Fury may be able to stop the beast, but hope dwindles fast once Dr. Fury realizes that the monster is not only intent on murder but procreation as well. Could this be the end of the world as we know it? For the answer watch, Mutantis!

'Mutantis is quite easily the most fun but yet most bizarre time you will have watching a film this year.'

'Mutantis is fun, chaotic, and utterly perverted. It has no redeeming value and its amorality is likely to harm unsuspecting children. It is, in short, incredible.'

'SyFy should hire dire Wit to take on their next creature feature and we may end up with a SHARKNADO movie worth a damn!'

'Gross, playfully offensive and gleefully ludicrous, Mutantis is one of the most idiotic things I've seen in my entire life...so of course I fuckin' love it!'

—B is for Best