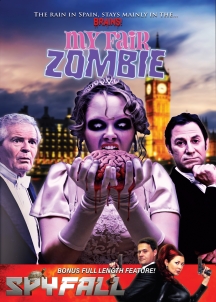 A Musical Comedy with GUTS! In an alternate Edwardian England infested by zombies, a professor of phonetics attempts to teach a zombie woman to be a proper English lady with hilarious and gore soaked results! Very loosely based on the play by George Bernard Shaw. Includes the bonus movie "Spyfall" - It's Airplane meets Casino Royale in this hilarious Spy parody from the makers of Jurassic Shark & winner of Best Comedy Feature at the Buffalo Dreams Fantastic Film Festival. When a fellow agent fails in his mission to recover the MacGuffin, Canada's greatest Spy is called in to finish the job.