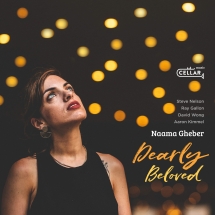 Conceiving her debut album, vocalist Naama Gheber summoned inspiration from an intimate life on the New York bandstand. Among tapering red curtains, maple bar tops, snares and brushes, the Be'er Sheva-born artist nightly explored selections from the canon of American standards with her fellow artists -- music that would become the centerpiece for Dearly Beloved. As tracks materialized one by one, she observed a lyrical theme emerging, one that presents triumphs, challenges and ultimately changes within the human condition reflected in relationships with others.

From the outset, Gheber sought to interpret the album's repertoire in a unique, compelling way despite each tune's storied recording history. She sat at the piano with stacks of handwritten charts, and turned to her trio mates for input. The resulting 12 tracks and two single releases spotlight Gheber's lush, at times ethereal vocals experimenting with harmonic concepts, varied time feel and metric modulation amid resonating contributions from pianist Ray Gallon -- who contributed arrangements for Dearly Beloved -- bassist David Wong, drummer Aaron Kimmel and special guest, vibraphone master Steve Nelson.

''Israeli born jazz vocalist Gheber knows her way around the great American song book and has mastered the art of being a swinging gal. With a kittenish voice giving everything a sprightly tone, along with her sense of her song choices, this is a sweet change up for the modern version of the canon. Working with her established crew, everybody can be counted on to hit the right notes at the right time giving the whole a proper send off into the world. Quite a find and an auspicious debut''.

Vocalist Naama Gheber specializes in standards from the '30s and '40s, when romantic, often obsessive love songs countered the harsh realities of the Great Depression and World War II. While she's hardly the first young vocalist to revisit that canon in our own uneasy times, the Israeli-born Brooklynite brings a fresh perspective and emotional nuance to the Great American Songbook on her debut album, which was honed during a yearlong residency at West Village club Mezzrow.
Gheber also has a crack ensemble backing her up. Steve Nelson's vibes sing on the opening title track, winging us back to a smoky '30s cocktail lounge. Ray Gallon's keyboards and David Wong's bass keep the conversation lively on swinging uptempo numbers like ''S Wonderful,' while Aaron Kimmel's drums conjure up the tropical jungle of an obsessed heart on 'So In Love.' But it's Gheber's skill at finding the emotional core of every song that gives the album its heart.
On her tour de force 'So In Love,' Gheber's voice evokes a honeyed warmth in the opening lines, then swoops up and plummets down into lovestruck madness with Cole Porter's quintessentially masochistic lyrics. Elsewhere, her voice drifts into a pillow of dreams on a lovely version of 'Good Night My Love (Layla Tov),' which conflates the old standard with a lullaby from her own Israeli childhood.
It's a promising debut for a vocalist who's only started to tap the wellspring of romantic standards on her first album, which augurs well for future releases.