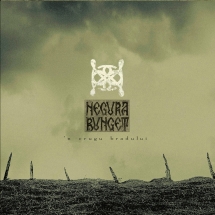 Negurã Bunget re-open the gates that lead to archetypes and structures of Romanian myth-spirituality. Calm, yet incredibly aggressive...evil...melodic, yet full of counterpoints... a new perspective upon immortality... different... unique... With a new lyrical approach, deeper and much more complex than ever before, intertextualizing with old Romanian folk ballads, with rhythms that transform patterns of Romanian folk music, combined with some of the finest Black Metal sounds and with the addition of traditional instruments, Negurã Bunget set on their new quest trying to unveil hidden essences of Romanian spirituality thus crossing, for the very first time, the borders of Transilvanian dimensions. Apparently stuck into the temporal, through its descriptions of the four seasons and the changes they bring in nature, the new album aimed at breaking the very limits of the temporal, launching into a definition of the a-temporal's vastness. With the use of the four seasons, amply presented through the eyes and the mind of a shepherd (who symbolically stands for a link between the two dimensions, temporal and a-temporal) the new album offers four different aspects of immortality, eventually unifying them in a single, yet so wide understanding of the concept... the Black's eternal unity. The shepherd himself is a combination of humanness and wilderness, of reality and fantasy, of earth and skies, of woods and waters, of past and future, of north and south: the lonely carrier of a local universal knowledge who, by witnessing the cycles in nature becomes, in his turn, a cycle... the symbol. Once again, the band tried to enlarge the meaning of Black through yet another use of local color... identity...

'best Debut Album in the Black Metal scene this year!

This Album will become a Legend