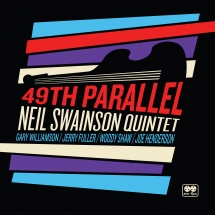 Originally released on CD in 1988, this extremely rare and sought out recording makes its debut on vinyl with a limited edition pressing of 1500. The debut album from one of Canada's most important bassists, Neil Swainson has played with George Shearing, Diana Krall and countless others. This recording features tenor saxophonist Joe Henderson and trumpeter Woody Shaw. The album was Woody Shaw's last studio recording. The album contains one bonus track not available on the original CD that will be available on a download card. The album package will feature new artwork, photos, interview and liner notes.