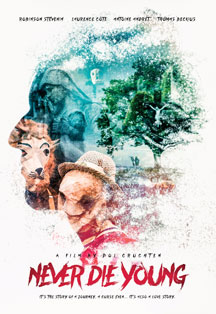 Guido Peter was born in Petange on the 7th December 1959. At the age of 12, he is sent to a boarding school in Arlon. Having wasted three years of his life, he returns back to his native town. But things aren't the same anymore, Guido matured and starts behaving differently. Having lost all his faith in authority, he soon turns to drugs as means of coping. Trying to keep up with his habit, he starts selling heroin and living as a junkie. Yet, it won't be long until life as he knows it comes to a stop. Tetraplegic and bound to a wheelchair, will he manage to leave his 'greatest love' and kick the habit? Or is the urge stronger?

Luxembourg's foreign-language Oscar submission is this striking documentary/narrative hybrid from veteran producer-helmer Pol Cruchten. 'Never Die Young' uses voiceover narration, arresting widescreen compositions and masked actors to chronicle the unrelentingly grim life story of a junkie (presumably the late 'Giudo' to whom the pic is dedicated). This rather abstract exercise in cinematic biography is as compelling aesthetically as it is somewhat remote emotionally, and will prove best suited to artscasters, cinematheques and boutique home-format distribs.