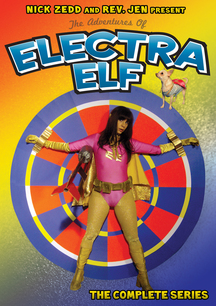 By day Electra Elf is Jennifer Swallows, a mild-mannered reporter for Art Star Scene Magazine (A.S.S.) and Fluffer is Boobie, a chihuahua-clothes model, but when danger calls, the two put on stylish leotards and kick butt, taking down corrupt senators, sleazy frat-boys, satanic cults, landlords, zombie-tourists and other miserable malcontents in each heart-stopping episode. Unlike Spiderman, Superman or Batman, these aren't the same old superheroes rehashed by entertainment moguls to fill the pockets of media conglomerates. These are original superheroes for the new millennium!

Electra Elf & Fluffer is simply the best tv show that has ever been produced on any budget. Last night's episode had me laughing my ass off!