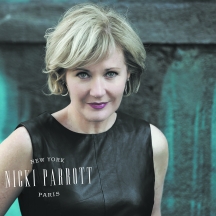 Multifaceted jazz bassist, Nicki Parrott, showcases the warm phrasing of her unique vocals while swinging the music to perfection.

Parrott is a world renowned double bassist and jazz vocalist. Born in Newcastle, Australia, Nicki started her musical training at age four with the piano and flute. Nicki switched to double bass at the age of 15.

Nicki was bassist and vocalist for the legendary Les Paul for over 10 years, in addition to performing at most of the world's top jazz venues and festivals including THE Jazz Cruise and sold-out performances at Birdland and Dizzy's in NYC.

"She has that special gift you cannot buy in a music store." Les Paul

Bassist and singer Nicki Parrott is always a delight to hear, whether she's singing or playing bass or (astonishingly, to me) doing both simultaneously. Her latest is a quartet date that focuses on what we call the American Song Book-basically, songs by the likes of Cole Porter, Rogers and Hart, Cahn and Styne, and one of more of the Gershwins. These are songs that usually were first heard in stage musicals in the 1920s and 1930s, and that have since become jazz standards (as well as providing the chord changes for additional jazz tunes). So the repertoire on which Parrott is drawing here is pretty familiar: "I Love Paris," "Manhattan," "Slaughter on Tenth Avenue," etc. But she sings and plays them with such warmth and with such a tender yet firm sense of swing that you don't mind whatsoever hearing them again. Kudos also to reedman Harry Allen, who brings his own powerful sense of warmth and swing to the proceedings. For all jazz collections.

New York and Paris are two cities for which vocalist/bassist NICKI PARROTT has deep affection. About six years ago she recorded an album titled The Last Time I Saw Paris that contained a variety of songs related to France, either by subject or by composer. On her latest album, From New York to Paris (Arbors - 19466), she splits her attention between songs related to France or to New York City. To assist her in her explorations she has enlisted Harry Allen on tenor sax, Gil Goldstein on accordion, John di Martino on piano and Alvin Atkinson on drums. The group has a ripping good time addressing the 14 songs on the program. Parrott has developed into one of the elite singers on the jazz scene, and her bass playing is on the same level. Her cohorts are equally adept. Whether attending to songs about New York like 'On Broadway,' 'Manhattan,' with some new lyrics by Parrott and Brian Wittman, 'Broadway' or 'Do You Miss New York,' or looking for inspiration across the Atlantic on tunes such as 'I Love Paris,' 'Under Paris Skies,' 'April in Paris' or 'La Mer,' they find spot on ways to present them. An added bonus is the set of liner notes by Roger Crane that add some intelligent commentary to accompany the music. Parrott has given us another winner!

Everything about this new album from bassist/ vocalist Nicki Parrott is exquisite. She takes a batch of familiar songs connected with the title cities and, through elemental and delicate singing and group interplay, finds beautiful and timeless meaning. Parrott is a complete musician with gentle, quiet vocals suggesting a mix of worldliness and innocence of, say, Marilyn Monroe or Audrey Hepburn. And the arrangements--all Parrott's--tell an engaging story.

Parrott includes the little-known verse to Cole Porter's 'I Love Paris'--slowly and thoughtfully and with the beautiful accordion of Gil Goldstein--but when the chorus comes the tempo increases and the ever-swinging tenor saxophonist Harry Allen gives the tune real verve. Parrott plays the bridge of Michel Legrand's 'I Will Wait for You' as a gorgeous arco bass introduction and, again, Allen and Goldstein complete the lovely picture. The group performs the too-little heard Jule Styne-Sammy Cahn gem 'Brooklyn Bridge' and Barry Mann-Cynthia Weil-Jerry Leiber-Mike Stoller pop hit 'On Broadway' is done as a soulful, funky instrumental. And speaking of instrumentals, there's an in-the-pocket version of Vernon Duke-Yip Harburg's 'April in Paris', which incorporates the old Basie riff that the Count used to bring back several endings, and a very brief take on Richard Rodgers' ballet theme 'Slaughter on Tenth Avenue'. The Parisian atmosphere is present again in Parrott's soft vocals with John DiMartino's piano on Jacques Brel's 'Ne Me Quitte Pas' and equally intimate singing with accordion on Hubert Giraud-Jean Dréjac's 'Under Paris Skies'.

The recording is rich with gorgeous singing and strong playing, coming together most strikingly on Dave Frishberg's witty yet bittersweet 'Do You Miss New York' and the Richard Rodgers-Lorenz Hart classic 'Manhattan', for which Parrott has written some humorous contemporary NY location references.

Nicki brings clear articulation, beautiful tone, a sense of rhythmic assuredness and a touch of allure to inventive arrangements.

...a rarity, a first-class bassist whose playing is as sublime as her vocals.