Night Of The Unspeakable 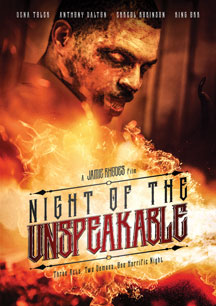 "Night of the Unspeakable" is a hip hop, horror, thriller set in the confines of a rehearsal/recording studio. A Rapper and his Entourage, an R&B Girl Group, a Rock and Soul Band and a Spoken Word Artist are trapped for one terrifying night with two evil and deadly demons. The demons are accidently released, but once they are free they begin to quench their carnal desires and blood lusts by seducing and then sadistically slaying their victims. The trapped young artists come to the frightening and brutal realization that they are in a life or death struggle and that they must destroy the demons before they lose their lives and their immortal souls.

Tradewind Productions did an awesome job of combining a great script, actors, and behind the scenes makeup artist, stylist and editing to bring this tale to the big screen. This film will have you on the edge of your seat, filled with action, humor and horror. The theater was at 80% capacity, and you could hear gasp and laughter fill the room at various segments of the film. The lead actors were able to capture and maintain their presence in this film, committing their own stunts.